The boys soccer team will get the post season started for the Eagles opening up district play Tuesday, October 16 against the University Liggett in Grosse Pointe.  The cross country team will wrap up conference play at the MIAC conference championship on Friday, October 19 before they compete at the MHSAA Regional Championship on Friday, October 26.  The volleyball team will then open up district play on Wednesday, October 31 at Huron Valley Lutheran.  The volleyball team is seeking to win it’s 4th straight district title but they will need to contend with 2-time defending state champion Plymouth Christian with a potential match-up in the district final.  The two teams have split this year’s season series with each team winning their home contest.

District Semifinal: Thursday, October 18 at TBA vs. Hope of Detroit at TBA

District Final: Saturday, October 20 at 11 AM at Liggett

District Semifinal: Wednesday, October 31 at 5:30 PM vs. the winner of Lutheran Westland and Universal Learning 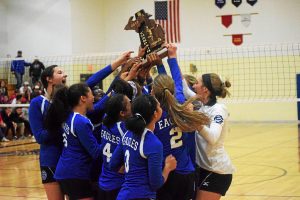 Picture courtesy of the Oakland Press