Emily Van Dyke signed her National Letter of Intent to play volleyball today at NCAA I Abilene Christian University.  Van Dyke has helped the Lady Eagle volleyball program win 109 games over the last 4 years.  This year the Lady Eagles captured the MIAC Conference Blue Championship which is the programs 1st conference title since the team was in the lower MIAC Red division in 2015.  Van Dyke has been apart of 4 MHSAA District and 2 MHSAA Regional Championships.  Van Dyke and her teammates will look to capture their 3rd straight regional title tomorrow night against Cardinal Mooney at Plymouth Christian.  Over Van Dyke’s 4 years she has set many school records including 1564 career kills, 534 kills in a season, 32 kills in a game, 1328 career digs and 278 career aces.  She is a 2 time team MVP and is an Eagle Award winner.  She has been named to the 1st All MIAC Conference Team and MIVCA All Region team 3 times.  Van Dyke was 2nd All State in 2017 and 1st team All State in 2018.  She will play next season for Angela Mooney who is in her 3rd season leading the Wildcat Volleyball Program.  Congratulations Emily! 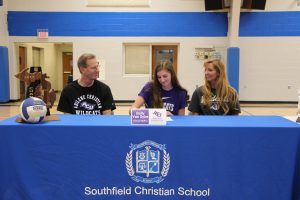