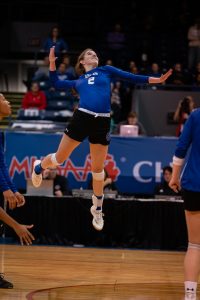 Emily Van Dyke was named 1st Team All State by the Michigan Interscholastic Volleyball Coaches Association for the 2019 season.  This is Van Dyke’s 2nd time being named to the 1st team after making the team in 2018 after being named 2nd team all state in 2017.  Van Dyke was a 4 year member of the Southfield Christian Varsity team where she was named 1st Team All Conference the past 3 years.  She is also a 3 time All Region selection as well as a 3 time team MVP.  Van Dyke has helped the volleyball program to 4 straight MHSAA District Titles, 3 straight MHSAA Regional Titles, back-to-back State Semifinal appearances and the 2019 MIAC Conference Title.  She will leave to play at Abilene Christian next year and will leave the Eagles as the all time leader in kills in a game (32), kills in a season (565), kills in a career (1,640), digs in a career (1358) and aces in a career (285).  Van Dyke also earned Academic All State honors this past season and is a 2 time winner of the Eagle Award. 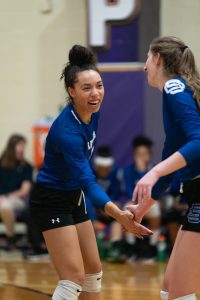 Caitlin Warnshuis was named 2nd Team All State by the Michigan Interscholastic Volleyball Coaches Association for the 2019 season.  This is Warnshuis’ 3rd time being named all state after making the 3rd team the past 2 seasons.  While at Southfield Christian Warnshuis has been named 1st Team All Conference and All Region twice and helped the Eagles to 2 straight MHSAA District and Regional titles, along with making back-to-back trips to the MHSAA State Semifinals.  After helping lead the Eagles to the 2019 Conference Title, Warnshuis will attend Valdosta State next year and she ranks 2nd all time in the Eagles record books with 891 career kills.  Her 27 kills in this year’s district finals ranks 4th most in a game and her 445 and 446 kills over the past 2 seasons is 3rd and 4th best in a year.  Warnshuis also is 5th all time in career digs with 518.  Prior to coming to Southfield Christian Warnshuis was part of the 2017 MHSAA Class D State Title Team and the 2017 MIAC Conference Championship Team.  She finished her overall varsity career with 1130 career kills. 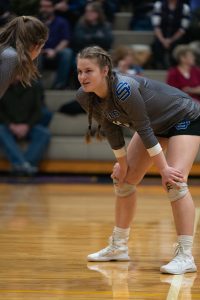 Rachel Stiteler was named All State Honorable Mention by the Michigan Interscholastic Volleyball Coaches Association for the 2019 season.  Stiteler is a 3 year member of the varsity volleyball program.  She is a 2 time all state honorable mention selection after making the team in 2018, as well as a 2 time All Region selection.  Stiteler earned 1st All Conference honors this year after making the 2nd team last year.  She also earned Academic All State this year.  Stiteler has been apart of 3 MHSAA District and Regional titles, and she has been a member of the Eagles 2 State Semifinal runs.  The senior setter helped the Eagles capture the 2019 MIAC Conference Title and she holds the top 5 single game assists records with a career high 50 in the 2019 State Semifinal match.  She also set the single season record with 995 assists this year and the career mark with 2,358 total assists.  Stiteler is a former Eagle Award winner.