Head Softball Coach Ken Brown has been a part of the Southfield Christian community for over 40 years.  Last spring he retired from teaching Math at SCS after 4 decades of service.  A Chicago native and Wheaton College alum, Brown is entering his 35th season as the head softball coach at SCS serving from 1982-2012 and 2016-present.  During that time the Eagles have won 632 games and lost 296.  Brown has led the Eagles to 18 MIAC Conference Titles, 20 MHSAA District Titles (including 14 straight from 1998-2011), and 5 MHSAA Regional Titles.  He was inducted into the Michigan High School Softball Coaches Association Hall of Fame in 2008 and the Southfield Christian Athletic Hall of Honor in 2013.  Coach Brown is also one of Eagle Athletics biggest fans and he can be seen often times working in the announcers box at football games, keeping the score book at basketball games or just being a fan in the stands occasionally leading a “We are SC chant”.  Coach Brown continues to serve the SCS community today by working at the school’s retail store, Encore at the corner of 12 Mile and Southfield Road.  We are grateful for Coach Brown and his wife and their service to Southfield Christian.  We pray as a community for the Brown’s today. 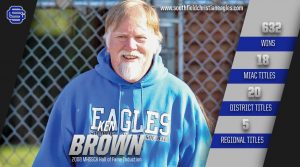