Southfield Christian School captured it’s 1st State Championship in 1989 by winning the MHSAA Class “C” Girls Cross Country State Title.  The team at that time was made up of a core group of sophomores that would go on to dominate the high school running circuit over the next 3 years and pave the way for decades of running excellence for Eagles Cross Country.  This core group from the Class of 1992 of Tammy Cobb, Anna Kraftson, Charleen Long and Joy Wright would combine to win the 1990 MHSAA 3200 Meter Relay State Title and would return that fall to finish as the State Runner-up coming up short in their title defense.  The 1991 team proved to be the most dominate cross country team in school history by going undefeated on the season winning every invitational including the prestigious Holly Invitational.  They would win the Oakland County meet placing all of their runners in the top 23 of the over 200 runners.  The team captured their 4th straight MIAC Conference title and 4th straight MHSAA Regional title with every runner earning All Conference and All Regional honors.  At the state meet the girls would place 6 runners in the top 17 and were 102 points ahead of the the runner-up team.

Five of the ladies have been inducted into the Southfield Christian Athletics Hall of Honor including Coach Jim Wood who was inducted in the original class in 2007.  Wood coached the cross country teams at SCS from 1978-1991.  Joy Wright was also in the 2007 class inducted into the hall of honor.  Wright won the 1991 MHSAA 800 Meter State Title and continued her running career at Hillsdale College.  She was also joined in the hall of honor by her sister Laura ’95 who was apart of the 1991 State Team and also ran at Hillsdale and her sister Heidi ’99 who ran at Cedarville University.  In 2012 Cobb, Kraftson and Long joined the Wright sisters in the hall of honor with their induction.  Kraftson went onto to run at Wheaton College. 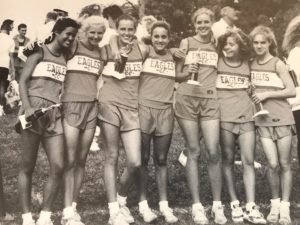