Southfield Christian School has 14 varsity teams and Todd Crouch runs 4 of them as the Head Coach for Cross Country and Track & Field for both boys and girls.  Coach Crouch has led both programs for the past 9 years.  During his tenure the track teams have won 5 MIAC Conference Titles and 3 MHSAA Regional Titles.  He coached the 2019 Boys Track Team to a 2nd place finish at the MHSAA State Meet and the 2017 Girls Track Team to the MHSAA State Title.  Coach Crouch has seen his teams break half the school track records and even a MHSAA Division IV state record with Blake Washington’s 400 meter run in 2015 when the Eagles finished 3rd at the state meet.  He has earned 7 MIAC Coach of the Year Honors and has won a number of Michigan Interscholastic Track Coaches Association Regional and State Awards.  Coach Crouch has taught Art at Southfield Christian for 10 years.  Prior to coming to SCS Coach Crouch attended Spring Arbor College where he also ran.  His wife Katrina and him have a son Henry and are expecting twins in June.  Join us in thanking the Crouch’s for their service to SCS and praying for their growing family. 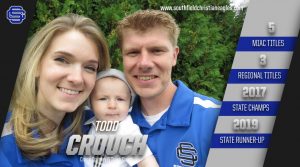