Coach Sarah Johnson was named the Head Coach of the Lady Eagles Basketball program in 2015 and has just completed her 5th year as Head Coach.  When Coach Johnson took over the program they were coming off their worst season in school history having gone 2-19 with only 7 players in the high school program.  Coach Johnson embraced a difficult rebuild and the Basketball team has shown improvement each year finishing 7th, 6th, 4th and 2nd respectively in MIAC Red Conference play.  The program moved up to the MIAC Blue this year which was rated as the toughest MHSAA Division IV Conference in the state this year where the Eagles finished 4th and were able to win one more game than last year overall, even against a tougher schedule.  Coach Johnson has led the Eagles to 2 MHSAA District Titles winning in 2017 and 2020 and she was also the MIAC Coach of the Year in 2019.  The Lady Eagles are poised for another step forward next year as they return a young core group of returning players along with a potentially strong incoming freshman class.

Coach Johnson started coaching at Southfield Christian in 2014 when she coached the middle school girls and boys basketball programs.  She played her high school basketball at Woodruff High School in Peoria, Illinois before attending Stanford University where she ran track.  Coach Johnson has also earned her medical degree from the University of Illinois and is the founder of the STRIVE Joint & Health Center in Southfield which provides care and rehab of sports injuries and muscle, joint and nerve problems.  She and her husband Brian have two children who have gone through Southfield Christian, Zach, ’19 and Alexandra, ’20. 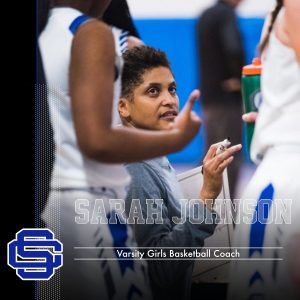